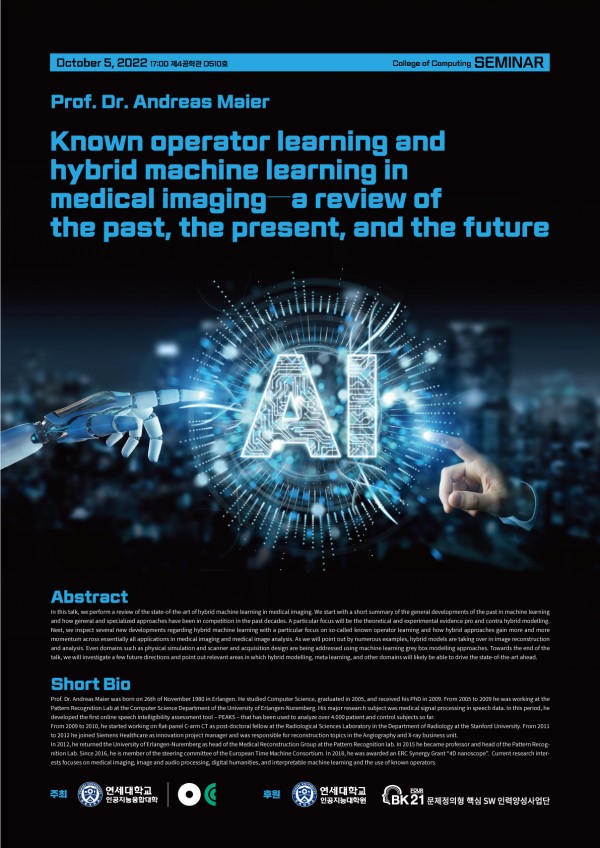 
제목 : Known operator learning and hybrid machine learning in medical imaging—a review of the past, the present, and the future

Abstract:  In this talk, we perform a review of the state-of-the-art of hybrid machine learning in medical imaging. We start with a short summary of the general developments of the past in machine learning and how general and specialized approaches have been in competition in the past decades. A particular focus will be the theoretical and experimental evidence pro and contra hybrid modelling. Next, we inspect several new developments regarding hybrid machine learning with a particular focus on so-called known operator learning and how hybrid approaches gain more and more momentum across essentially all applications in medical imaging and medical image analysis. As we will point out by numerous examples, hybrid models are taking over in image reconstruction and analysis. Even domains such as physical simulation and scanner and acquisition design are being addressed using machine learning grey box modelling approaches. Towards the end of the talk, we will investigate a few future directions and point out relevant areas in which hybrid modelling, meta learning, and other domains will likely be able to drive the state-of-the-art ahead.

Bio:
Prof. Dr. Andreas Maier was born on 26th of November 1980 in Erlangen. He studied Computer Science, graduated in 2005, and received his PhD in 2009. From 2005 to 2009 he was working at the Pattern Recognition Lab at the Computer Science Department of the University of Erlangen-Nuremberg. His major research subject was medical signal processing in speech data. In this period, he developed the first online speech intelligibility assessment tool – PEAKS – that has been used to analyze over 4.000 patient and control subjects so far.
From 2009 to 2010, he started working on flat-panel C-arm CT as post-doctoral fellow at the Radiological Sciences Laboratory in the Department of Radiology at the Stanford University. From 2011 to 2012 he joined Siemens Healthcare as innovation project manager and was responsible for reconstruction topics in the Angiography and X-ray business unit.
In 2012, he returned the University of Erlangen-Nuremberg as head of the Medical Reconstruction Group at the Pattern Recognition lab. In 2015 he became professor and head of the Pattern Recognition Lab. Since 2016, he is member of the steering committee of the European Time Machine Consortium. In 2018, he was awarded an ERC Synergy Grant “4D nanoscope”.  Current research interests focuses on medical imaging, image and audio processing, digital humanities, and interpretable machine learning and the use of known operators.